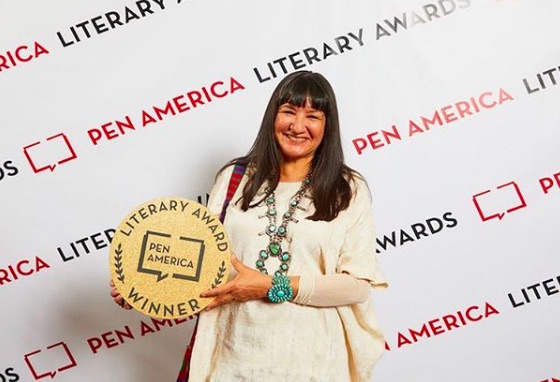 Sandra Cisneros, the Mexican American novelist whose books “The House on Mango Street” and “Woman Hollering Creek” are widely considered contemporary classics of American literature, has won the PEN/Nabokov Award for Achievement in International Literature.

Cisneros is the third author to win the annual award, after Syrian poet Adonis in 2017 and Irish novelist Edna O’Brien in 2018.

In a telephone interview with The Times, Cisneros said she was surprised to receive the award from the literary foundation PEN America.

“It’s astonishing,” she said. “I truly don’t feel that I’ve arrived at where I want to be yet. I feel that I’m just getting started.”

The PEN/Nabokov Award, a collaboration between PEN America and the Vladimir Nabokov Literary Foundation, is given each year to “a living author whose body of work, either written in or translated into English, represents the highest level of achievement in fiction, nonfiction, poetry, and/or drama, and is of enduring originality and consummate craftsmanship,” according to PEN America’s website

This year’s award was judged by authors Alexander Chee, Edwidge Danticat and Valeria Luiselli. “In a formidable and awe-inspiring body of work, which includes fiction, memoir, and poetry, Cisneros brings us astounding and lyrical voices from burning, maligned, devastated, as well as reassembled houses, and nations,” the judges wrote. “It’s hard to imagine navigating our world today without her stories and her voice guiding us toward needed much reclamation and endurance.”

The Lannan Literary Awards and Fellowships were established in 1989 to honor both established and emerging writers whose work is of exceptional quality. The awards recognize writers who have made significant contributions to English-language literature. The fellowships recognize writers of distinctive literary merit who demonstrate potential for continued outstanding work.

American Book Award from the Before Columbus Foundation

The American Book Awards Program respects and honors excellence in American literature without restriction or bias with regard to race, sex, creed, cultural origin, size of press or ad budget, or even genre. There would be no requirements, restrictions, limitations, or second places. There would be no categories (i.e., no “best” novel or only one “best” of anything). The winners would not selected by any set quota for diversity (nor would “mainstream white anglo male” authors be excluded), because diversity happens naturally. Finally, there would be no losers, only winners. The only criteria would be outstanding contribution to American literature in the opinion of the judges. 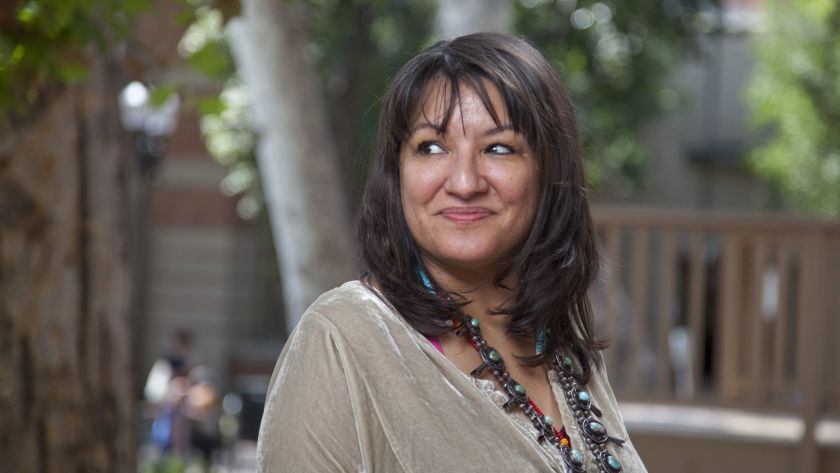 All winners are accorded equal standing. Their publishers are also to be honored for both their commitment to quality and their willingness to take the risks that accompany publishing outstanding books and authors that may not prove “cost-effective” in the short run. There are special Award designations (such as Lifetime Achievement) for contributions to American literature beyond a recently published book. 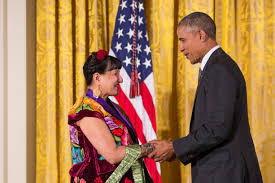 On September 22, President Obama awarded a 2015 National Medal of Arts to author Sandra Cisneros, in a ceremony at the White House recognizing contributors of the arts and humanities.

Sandra Cisneros will be honored "for enriching the American narrative. Through her novels, short stories, and poetry, she explores issues of race, class, and gender through the lives of ordinary people straddling multiple cultures. As an educator, she has deepened our understanding of American identity."

Sandra Cisneros is a poet, fiction writer, and essayist whose work explores the lives of the working-class. She is well-known for her groundbreaking debut novel, The House on Mango Street, and for her other books, which include Woman Hollering Creek and Other Stories, the poetry collection, Loose Woman, the novel, Caramelo,  and her most recent book, A House Of My Own: Stories from My Life, which was just awarded the prestigious PEN Center 2016 Literary Award. Cisneros is a graduate of the Iowa Writers' Workshop.