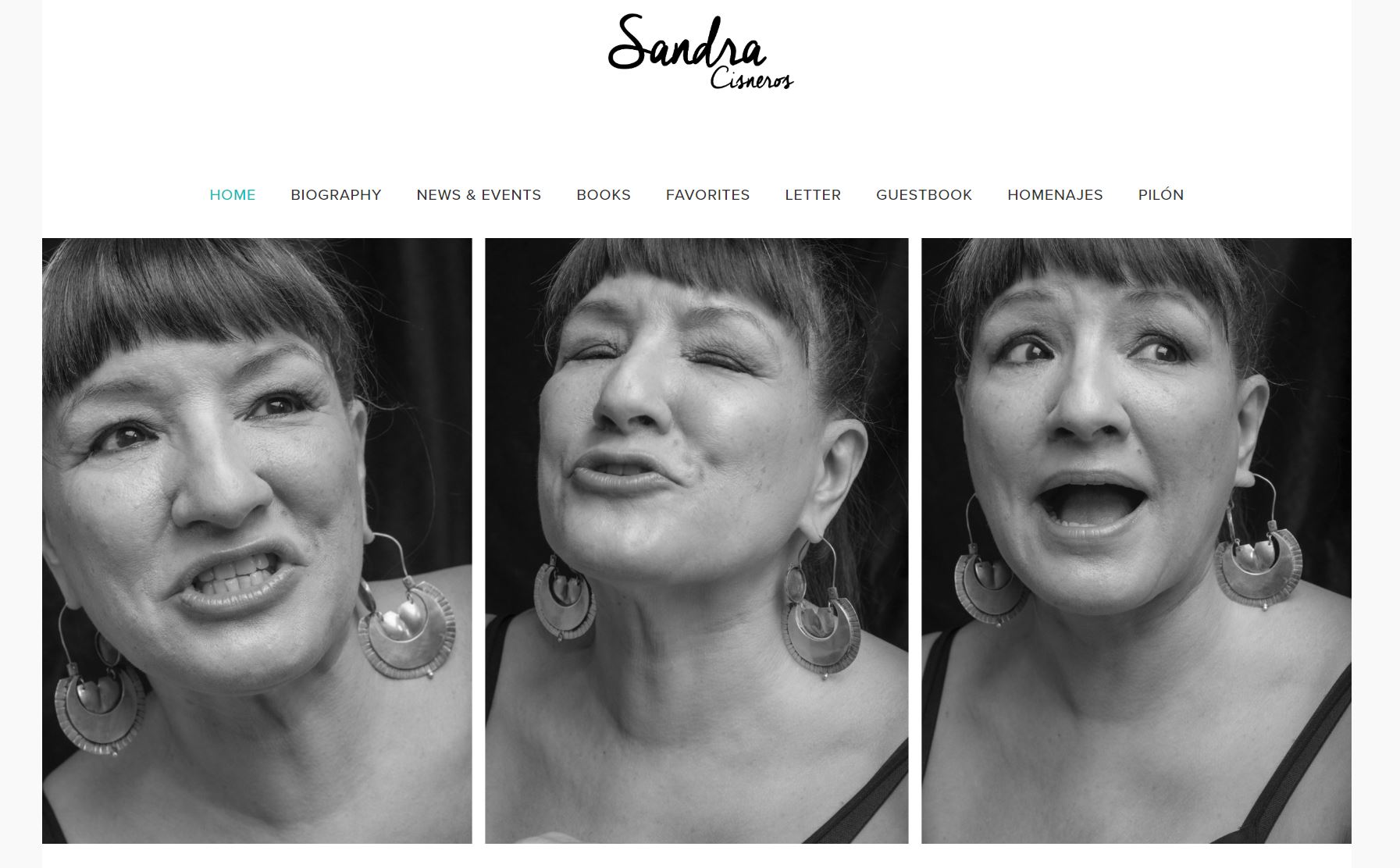 Voices from the Gaps 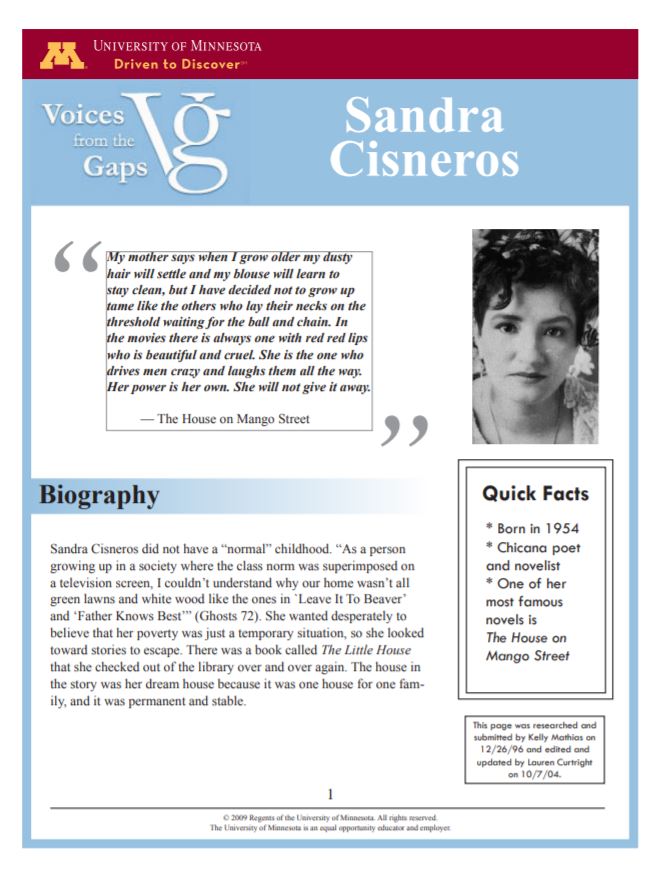 The full essay is available by clicking the link below. 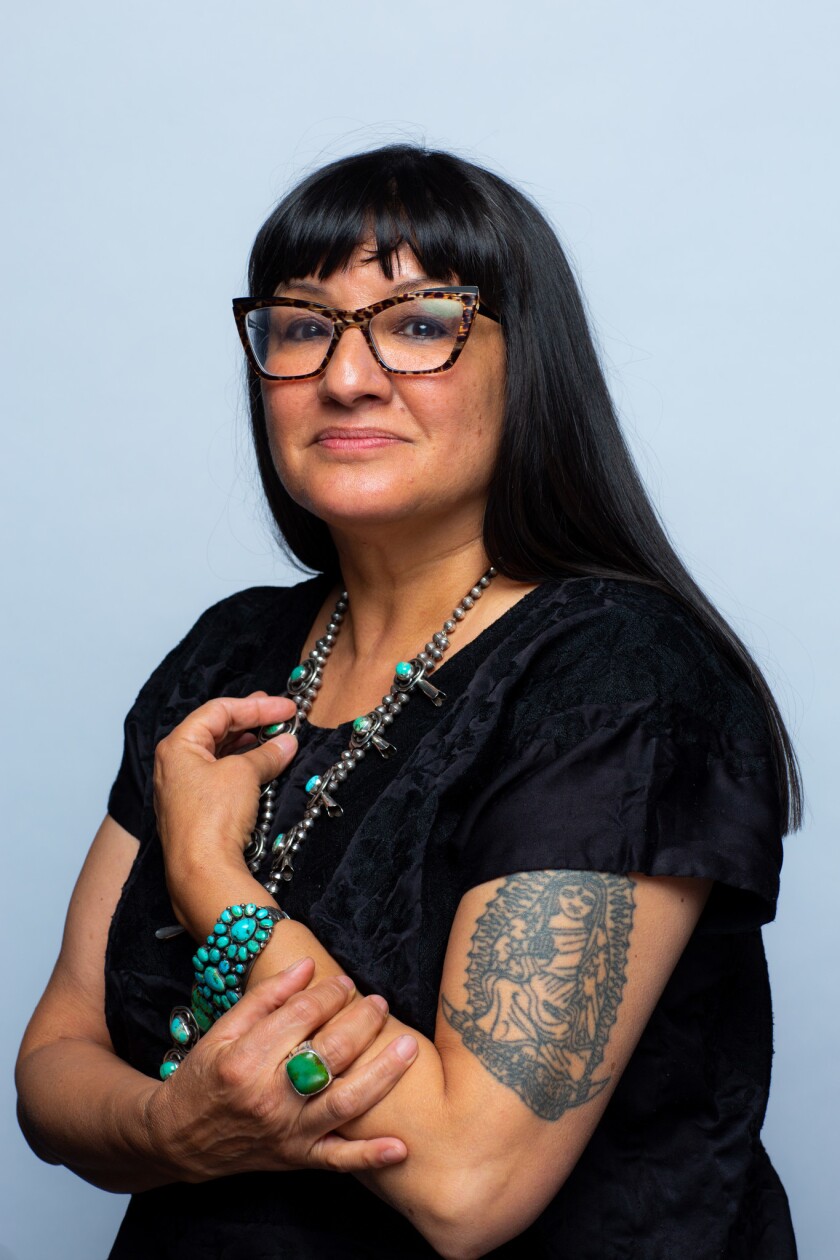 Sandra Cisneros was born in Chicago in 1954, the only daughter in a family of seven children. The Cisneros family traveled frequently between Chicago and Mexico to visit relatives, often settling in a different home upon each return. The family resided for the majority of Sandra’s youth in the Humboldt Park neighborhood.

Growing up in a home where library cards were mandatory, Sandra retreated into books and began to express herself in poetry. It was in high school, at St. Josephinum in Chicago, that Cisneros first found an outlet and discovered acceptance for her creativity. Encouraged by a teacher, Cisneros wrote poetry and became willing to share her work with her young peers. She worked on a high school literary magazine, eventually becoming editor. Cisneros went on to study English at Loyola University of Chicago, and in 1978 received her M.F.A. in creative writing from the renowned University of Iowa Writers’ Workshop.

Upon graduating from the Writers’ Workshop, Cisneros returned to Chicago and took a job teaching at the Latino Youth Alternative High School, a facility for high school dropouts. In her free time she wrote and submitted poems to literary journals with some success. She read her poems to club and coffee shop audiences, gradually earning a local reputation.

In 1982, Cisneros received a National Endowment for the Arts fellowship. With the award money she went to Europe, where she wrote The House on Mango Street. Drawing on the rootlessness of her childhood, the book created a vibrant picture of one girl’s idealization of “home.” (The house from the title is a composite of the author’s many homes, but is placed on a street, Mango Street, where the Cisneros family never actually lived.) Published in 1984, the book gained international acclaim, winning Cisneros the American Book Award. Today, The House on Mango Street is required reading in schools throughout the United States.

Sandra Cisneros looks back as a writer in search of home

Writer Sandra Cisneros has spent her entire life searching for a sense of belonging, a search chronicled in a new essay collection, “A House of My Own: Stories From My Life.” She sits down with Jeffrey Brown at the Mexican Cultural Institute in Washington to discuss her book, her life as a writer and her journey to find home.