I don't know what makes a bestseller, but I do know this: A good book doesn't care. What matters is that the story cast its magic, that it silences you into listening, and moves you to laugh — and even better, to cry and then laugh — and a long time later, to haunt you. Long after you have closed the book, it's what haunts and stays with you that matters, for then the story will have done its work.
Sandra Cisneros

ALL THE AGENTS AND SAINTS: DISPATCHES FROM THE U.S. BORDERLANDS 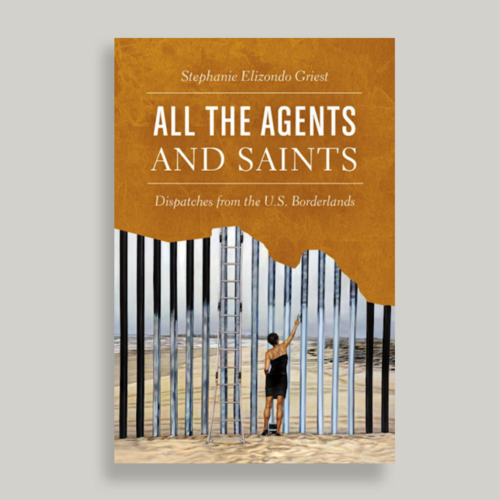 Stefanie Elizondo Griest
After a decade of chasing stories around the globe, intrepid travel writer Stephanie Elizondo Griest followed the magnetic pull home–only to discover that her native South Texas had been radically transformed in her absence.

AN INDIGENOUS PEOPLE’S HISTORY OF THE UNITED STATES

Winner of the 2015 American Book Award, this book examines the history that has been taken from Mexican, Mexican-Americans, Native-Americans, and Latin Americans. It’s one of those books that should be required reading for everyone—whether you’re indigenous or not. And, more importantly, politicians should be required to read it, too.

If more journalists were like Jorge Ramos we wouldn’t have Molotov Mouth in office. There are very few journalists who have huevos and Jorge Ramos is a big chingón who challenges us to speak up.

PARROT IN THE OVEN

This YA book, a story about a Latino family, is on my bedside. The author died an early death due to the pesticides he was exposed to as a young field worker.

I gave this book to President Obama when I went to the White House. Every politician needs to read him. Thich Nhat Hanh is the wisest human I know. He’s got it down. He addresses issues that I’m looking for answers to myself—ways in which I can respond to an increasingly globalized world.

DIARY OF A RELUCTANT DREAMER

In this hybrid memoir, Alberto Ledesma wonders, at what point does a long-time undocumented immigrant become an American in-the-making?

Baldwin is an author we need to be re-reading right now. He’s writing about the ‘50s and ‘60s and yet here we are in the new millennium and nothing has changed.I feel like we’re living in an upside down world. Only the late Eduardo Galeano, who passed away in 2015, could accurately capture in so few words the absurdity of the time in which we’re living.

THE DISTANCE BETWEEN US

Her story about an undocumented child who crosses the U.S. Mexico border puts a human face on the abstract issue of children and immigration.

I go back to this book a lot. It’s particularly relevant for our times.

RINGSIDE SEAT TO A REVOLUTION: AN UNDERGROUND CULTURAL HISTORY OF EL PASO AND JUAREZ, 1893-1923

Ringside Seat to a Revolution is one of my favorite history books. I open it often for research and inspiration. How is it this book isn't required reading for U.S. history? It has plenty of pictures; perfect for reluctant readers like our president.

This book made me want to read all the books she cites. It made me want to write, take risks and say the unsayable in these times. With this book, Danticat looks at writers who wrote in dangerous times.

UPSIDE DOWN: A PRIMER FOR THE LOOKING-GLASS WORLD

I feel like we’re living in an upside down world. Only the late Eduardo Galeano, who passed away in 2015, could accurately capture in so few words the absurdity of the time in which we’re living.

This is one of Soto’s best books. It’s an extraordinary story, beautifully told, about two Chicano brothers who work in the fields.

I reached for this book after the November election. I needed to surround myself with wisdom, words that would sustain and guide me. Harjo has been a personal mentor ever since we met at the Iowa Writers’ Workshop.