US IB English-A Study in Scarlet: "The Mormon Segment"

By Eileen Hallet Stone
Special To The Tribune
July 29, 2016

In 1887, Sir Arthur Conan Doyle published his first full-length detective mystery novel, "A Study in Scarlet," in London's paperback magazine, Beeton's Christmas Annual. In it, he introduced readers to the fictional eccentric but brilliant "consulting detective" Sherlock Holmes and his loyal friend and chronicler Dr. John H. Watson. Although Conan Doyle was destined to spark enormous popularity among British readers, "A Study in Scarlet" reaped animosity among Mormon missionaries in England. The poetic license that fueled Conan Doyle's rousing but fictionalized tale of romance, tragedy, rescue, retribution and murder was peppered with historical falsehoods about The Church of Jesus Christ of Latter-day Saints.

"Arthur Conan Doyle, a Portsmouth physician, had employed less than accurate research in using the Mormons in Utah as a backdrop for his story," historian Harold Schindler wrote in the April 10, 1994, issue of The Salt Lake Tribune. "At the height of anti-Mormonism on the continent, [it] bolstered what [readers] long suspected — that Danites, the Avenging Angels of 'Mormondon,' were steeped in the assassination of apostates; and polygamy was white slavery." "A Study in Scarlet" is a two-part mystery. In the first, recorded by Watson, Holmes uses rationality and forensic science to solve the separate murders of former Utah Mormons, Enoch Drebber and Joseph Stangerson, found with the word "RACHE," or "revenge," written on the wall in blood. In the second part, Conan Doyle transitions to early 1847 and the Utah Territory where John Ferrier and child Lucy were lost in the western desert and rescued by Mormons.

For years, Ferrier conformed to their religious doctrine but disapproved of polygamy. He resolutely believed "nothing would ever induce him to allow his [adopted] daughter to wed a Mormon." When Lucy falls in love with non-Mormon prospector Jefferson Hope, Ferrier is warned — "If she wed[s] a Gentile, she commits a grievous sin,"— and given a month to choose marriage to polygamist Drebber or Stangerson. Ferrier locked his door, cleaned his "rusty old shot-gun" and, seeking help, contacted Hope, the perpetrator and second narrator in part two. Failing to lead them safely out of the territory, Hope described discovering Ferrier buried in a "low-lying heap of reddish soil" and his fiancé Lucy — kidnapped and forced to marry Drebber — dead within the month.

Hope judged Drebber and Stangerson culpable for the two deaths, but was unable to get them convicted. When the polygamists fled the country, he tracked them down to exact a terrible revenge. Some see Conan Doyle's research shaped by various writers, including the Mormon dissident Fanny Stenhouse and former Mormon elder John Hyde, critics of plural marriage; Mark Twain's novel experience in the American West; and Brigham Young's Danites dramatized beyond belief by legend, lore and newspaper accounts. Amid contentions that Conan Doyle "sensationalized" his Mormon story, Sherlock Holmes' readership soared.

Over time, Conan Doyle adopted Spiritualism. On tour in America in 1923, he stopped in Salt Lake City under the auspices of the extension division of the University of Utah to address the "mysteries of life after death" at the Tabernacle. The May 12 Salt Lake Telegram reported Conan Doyle "insists [the dead] are not dead, but only gone to another, more advanced field of existence." The once-loathed Conan Doyle wildly enthralled an audience of some 5,000 and may have earned redemption. Or not. Staying briefly with family at the Hotel Utah, Conan Doyle received a letter from Dr. G. Hodgson Higgins. A non-Mormon, Higgins critiqued that "A Study in Scarlet" twisted his view of The Church of Jesus Christ of Latter-day Saints, and "gave the impression that murder was a common practice among [Mormons]."

Conan Doyle responded, "… All I said of the Danite band and [their] murders is historical so I cannot withdraw that tho' it is likely that in a work of fiction it is stated more luridly than in a work of history. It is best to let the matter rest, I think, and draw the Mormons as they now are." Eileen Hallet Stone, author of "Hidden History of Utah" and "Historic Tales of Utah," a new compilation of her "Living History " columns in The Salt Lake Tribune, may be reached at ehswriter@aol.com.

Sherlock Holmes Banned from Reading Lists for Being Anti-Mormon

Virginia school board declares 'A Study in Scarlet' to be derogatory
By Ujala Sehgal
August 13, 2011

The Creator of Sherlock Holmes Was, Like Many Victorians, Fascinated by Mormons 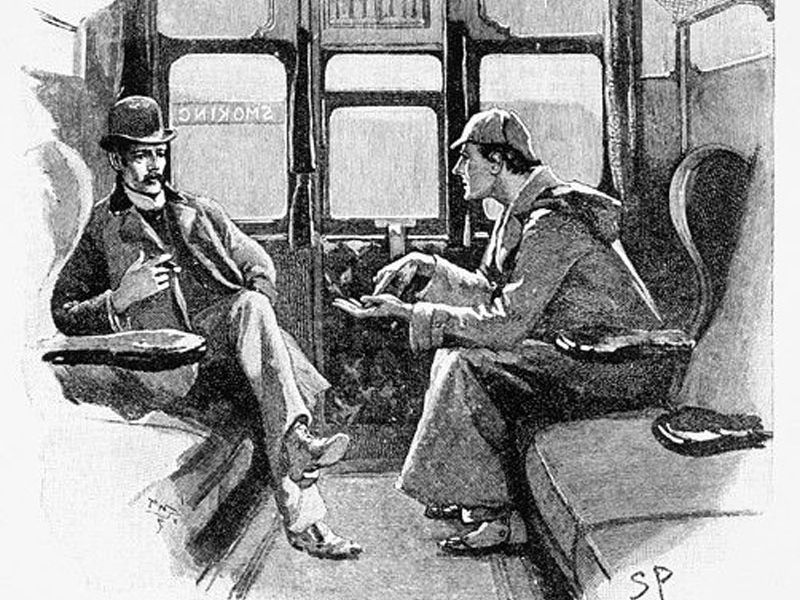 The first story featuring iconic detective Sherlock Holmes, ‘A Study in Scarlet,’ was published on this day in 1887—and set in Mormon Utah

In November 1887, a young writer named Arthur Conan Doyle published his first story about a soon-to-be-famous fictional detective, Sherlock Holmes. The dark tale, which appeared in Beeton’s Christmas Annual, was titled A Study in Scarlet. Some of its most dramatic parts are set in the Salt Lake Valley in Utah, in 1847, and follow a non-Mormon’s interactions with the Mormon followers of Brigham Young.

The novel paints a bleak portrait of Mormonism. The story includes forced marriage and violence, two things that were part of the British view of Mormons at the time.

When it came out, Hal Schindler wrote in The Salt Lake Tribune in 1994, “it provoked no great stir as a story nor did it especially signal the immense popularity for which its author and his creation were destined... it did, however, rankle Mormon missionaries to England, and sorely tested the tolerance of members of the Church of Jesus Christ of Latter-day Saints in America.” At the time he wrote the story, Conan Doyle had never even been to America. His choice of Mormons, portrayed as rapacious murderers in his work, reflected English beliefs about the primarily American faith.

Though the story didn’t make a huge splash at the time, over the years, it helped shape how British people perceived Mormons, writes Schindler. But it was part of a larger trend. “Doyle’s sensationalistic portrait of the Mormons had drawn upon what was already an extensive body of commentary in the British press,” writes scholar Sebastian Lecourt. “Since the late 1830s, when the Mormons had begun to attract English converts, a growing number of journalists, travel writers and novelists had been stoking the English public’s curiosity about this strange American sect, with its message of a new revelation and a restored biblical theocracy.”

These British writers were at best ambivalent about Mormons, Lecourt writes. On the one hand, polygamy was a bad fit with Victorian values; but on the other, he writes, some English commentators “started to identify with the Mormons, celebrating their establishment of a thriving colony on the Utah plateau as a great vanguard movement of Anglo-Saxon settler colonialism.”

For Conan Doyle, Mormons were at once sort of English–Christian, white, and descended from English people or from England themselves–and profoundly exotic. His choice to put Mormonism at the center of his story would have attracted the attention of the reading public, Schindler wrote. It certainly helped Doyle–and Sherlock–rise to fame.
https://www.smithsonianmag.com/smart-news/why-was-arthur-conan-doyle-fascinated-mormons-180965353/

Mormonism in "A Study in Scarlet": Colonization on the Frontiers (of Sherlockian Logic)

A Study in Scarlet recounts Jefferson Hope's murder of Enoch Drebber and Joseph Stangerson. Although it occurs in London, the homicide is precipitated by events in Utah Territory, which introduced a British audience to a vast frontier both untamed and beautiful. The land, which functions in the text as the quintessence of American alterity, is inextricably related to John Ferrier, Jefferson Hope, and Lucy Ferrier, Arthur Conan Doyle's independent and beautiful young woman whose capture by Brigham Young's band mirrors the settlement and colonization of the landscape. In this essay, I argue that Conan Doyle's exotic depiction of the land and its inhabitants complicates the precarious relationship between the Mormon adherents and Conan Doyle's idealized American West. Like seventeenth- and eighteenth-century settlers, Brigham Young and his devotees strike off on their own with the stated goal of religious freedom, but in doing so they impose a colonial order on what Conan Doyle describes as an uncultivated environment. Furthermore, this particular representation of colonization and the American West occupies an anomalous place in the Holmes canon. What has become known as the "Mormon segment" in Conan Doyle criticism is never actually reported to Holmes or Watson in A Study in Scarlet ; they solve the case with none of the backstory that was provided to the reader. I argue that the seemingly disparate Mormon episode functions as a formal frontier of Sherlock Holmes's system of logical deduction. The exoticized Utah desert and project of colonization circumvents Holmes's usual methods of analysis, which attests to the complexities of colonialism and displacement in the nineteenth-century American West. To read the full article, click HERE.

A Study in Scarlet- Review in the Journal of Mormon History

Since the first appearance of Arthur Conan Doyle's A Study in Scarlet in 1887, most reviewers have concentrated on Part I, "The Reminiscences of John H. Watson, rather than on Part II, "The Country of the Saints." For obvious reasons, the London-based portion of the first Sherlock Holmes story, describing his deductive methods, personal idiosyncracies, and encounter with the admiring John Watson, is considered more important than the Mormon melodrama. That melodrama is a rather improbable romance about John Ferrier and his ward, little Lucy, who are rescued from sure death in the American desert by the harsh-faced and harsh-faithed Mormons en route to Utah. Shortly after their recovery, Ferrier adopts Lucy as his daughter, they convert to Mormonism, and be come very prosperous in Utah. Ferrier refuses to marry and definitely re fuses polygamy. When Lucy is a blooming young woman, Brigham Young orders her marriage to either Enoch Drebber or Joseph Stangerson—both practicing polygamists and sons of members of the (mythical) Council of the Sacred Four-within a month. Ferrier refuses Young's ultimatum and, together with Lucy, attempts to escape Utah with the help of a non-Mormon, Jefferson Hope. Young's Avenging Angels (read Danites) track them and attack. Lucy's father dies, and several days later, the broken hearted Lucy follows. Hope escapes and vows vengeance on Drebber and Stangerson. After a twenty-year search, he tracks them down. To read the full review, click HERE.